The initial phase of this project followed the exhibition of much of the Flower Power project in the Otter Gallery, Chichester in Jan/Feb 2010 and begins with reflection on the feedback. The metaphor for change gradually moves from a focus on the multiple flower head of hydrangeas to the fragile and transitory nature of cherry blossom.

An important influence was a workshop with Sandy Sykes in February where I found a new way of working with a sketch book to capture and develop ideas and a way of using collage to develop larger work. This encourages an approach that begins with an intention rather than a plan that envisages a specific visual outcome.

In this first phase I made another book, focused on Flower Power images but considering them in more flexible ways, fragmented and broken, added to others and used more as a language. The intention was to explore change, collaboration, adaptation and the cycle of life, using the metaphor of blossom but relating this more directly to human experience.

I filled a sketch book with ideas over about a week, using all of the existing Flower Power images but adding some of blossom and people. I used inkjet prints for some of this and varied the materials I used to develop pages of images, driving each page with an intention but often surprising myself with the relationships and impact of the images that developed. I put ideas down and left several pages to come back to, which meant that as further ideas emerged I could weave them back and forward, linking ideas and developing them.

I was concerned that I don’t want to find myself simply enlarging these images, but many of them are probably part of an idea that needs to be related to others to make a more complex work. There was certainly the potential to develop a body of work from this set of ideas and this metaphor.

The intention in the first one, the violet one, was to introduce images of people alongside the flower images and to explore juxtaposition of different flower images as potentially different stages in the changing life cycle. I found that I didn’t need to extend or reduce the size of the supporting sheet of paper, but I did need to change the tone and colour of some areas to provide a contrast with the image that I printed onto it. I used a wider range of colour than I had in previous prints although I used some of the existing printing blocks. I added some new stencils and some drawing. I also put sections of a circle and square enclosing the central flower image, bringing structure and a contrast between the hard edged forms and the more irregular or diffuse ones.

I’m quite surprised at this work. It looks like my work – familiar images – but unfamiliar juxtapositions. There is an air of unrest about it – it is much less ‘balanced’ that work I have made previously. It looks interesting and rather challenging. There are areas that look unfinished and rough, but areas that are quite highly finished and detailed. This contrast demonstrates the changes in life cycle and the linking of fragments and parts of images shows much more of the development of collaborative relationships than was evident in the previous individual images.

I wondered whether I could develop an image that celebrated the full flowering of the hydrangea head whilst also reflecting it’s growth and change, to eventual decay. I started with an A1 print of the full head in ultramarine, then changed the tone of the central part of the print to make the image more vibrant and with a hint of 3D volume. I then enhanced the vibrancy with an orange/red circular surround, contrasting the hard edge of the circle with the irregular blossom edge. I then added a square, but divided it diagonally to give a light blue upper part and a darker grey/blue lower part, starting to develop the spaces for the reference to new life and decay. I softened both of these by rolling raw sienna across part of them and extending the area both upwards and downwards. I put the first print of people in the top area and added some darker mars violet flowers stencilled into the bottom area, starting to build up the contrast of new and fading.

This piece began to look very awkward and the central round flower print was so dominant that it was hard to see anything else. The space seemed too constrained for the contents. This brought up the issue of edges and how I choose the size and shape of a work. I wondered whether I could find the edges by working on a larger paper sheet to start with. I decided to cut up the image into the key groups that had developed and set them into a much bigger space. At first, I thought I could make five pieces, working through stages of emerging, developing, blossoming, fading, falling. I set the images onto five A1 sheets, so each had much more space. This was interesting, but the whiteness of the background paper was so strong that the slighter images were overwhelmed. I didn’t really want to keep the idea of ‘background’ and wanted every part of the piece to have a significant place in the whole.

I decided to start this piece again, more as I might start a painting. I wanted to have a pale image of blossom running through the centre of the work, to help to connect the four or five stages. I block printed some flower images in clusters, using white and very pale tints of oil based ink on a 1.5 metre square piece of Fabriano. Once these were dry, I hung the paper and used diluted acrylic inks to lightly paint and drizzle lines of raw sienna and violet down the whole sheet, over the flower images. As I had hoped, the flower images began to resist the water and acrylic. I blotted them a little to encourage them to glow through. I darkened the lower right part of the sheet as this would be the ‘decline and fall’ area. The paper was coggling, so I laid it flat on the floor to dry and, luckily, it did flatten.

I then began to stick the images cut out from the first piece in the appropriate areas of this large sheet, using masking tape. I often cut sections from the original work and re-shaped sections. I made some new blocks to print groups of people into these sections, using the imagery developed in the sketchbook. I kept to the colours that were predominant in the prints that were assembled in each of the areas, echoing the theme of growth and decline. I found that I didn’t need the whole size of the sheet and trimmed the edges away to establish an edge for the image that had emerged.

Although much larger than the first version and with more space for each element, this version had the same problem as the first, with the large round blue print attracting more attention than other parts of the work.

1) I wanted to make larger work developing the blossom theme, but had been thinking more about the life cycle, the power of nature to refresh and renew and the relationship of ourselves to our environment. I wanted to extend my language using a wider range of images for blossom and for people. I also considered introducing some images to contrast with the geometric hard edged shapes that I had used to contrast with the blossom, perhaps reflecting the houses and other structures in our environment.

Having left this peice for a while, I saw that it seemed to work in areas rather than as a single piece. I masked off each clear area separately and found that they worked much better when I could give them direct attention. This led to a decision to cut up the large piece into four sections of similar sizes, to become a sequence of four unique prints rather than one larger one. I cut them where the image seemed to fit well and this produced two tall pieces and two slightly smaller.

I added some more groups of figures to some of these, printing them on the off-cuts from the coloured background. I also printed some of the three flower block on the one that begins the falling blossom and the one that is fading and decline. 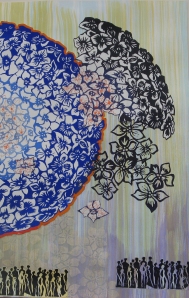 I think these work well in holding and extending the metaphor and work much better than they did as one whole piece. If I had added this amount to the whole piece it would have looked richer, but the groups of people would not have been ‘grounded’ and the central circle would continue to dominate.

I have now made a few more monoprints of falling blossom using a block I made from MDF board. I’ve introduced an ancient stone into one and it has produced an interesting idea that might develop into a larger piece.

I decided to try to work on a larger scale but in a more limited format, taking the idea of four different stages and emphasising the vertical relationships implied by blossom developing and falling. I’ve chosen MDF panels to experiment with the potential to work on these with paint, print and collage.

The first panel has strong links with the ‘Cherry Blossom: blue’ paper pieces in that it uses similar imagery. It incorporates fragments of the screenprinted canvas Flower Power image and links it to falling blossom and people connecting with the blossom. The second panel brings the people more into the blossom, overwhelming them in a world that only consists of themselves and the blossom. This ‘world’ is limited by a colour range which gives a hint of moonlight that only makes people and blossom visible. The third panel explores the power of blossom to conceal and reveal, hinting at worlds beyond the blossom revealed in vignettes. The fourth panel attempts to immerse people in falling blossom, moving from clusters of flowers to individual petals that have covering capacity. 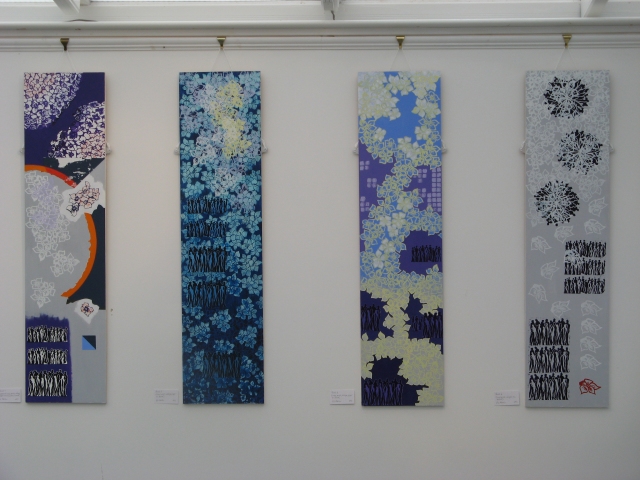 Most of this time was focused on preparation for my final MA show in September. I wanted to make a large piece because the space I had to show the work was very high and I thought that I had time to make a piece that demonstrated the links and overlaps between all of the other pieces as well as providing a visual focus. I was making screenprints using the cherry blossom images, and made some on canvas to use to collage onto a larger canvas sheet, to develop a piece that explored the potential of blossom to conceal and reveal.

There were many stages in this work, including many times when I pulled collage pieces off to re-stick them or to move them elsewhere. I added people, as before, but I also introduced bees into this image, basing them on an image used in ancient Minoan jewellery. The completed piece was shown in the MA exhibition through September 2010. 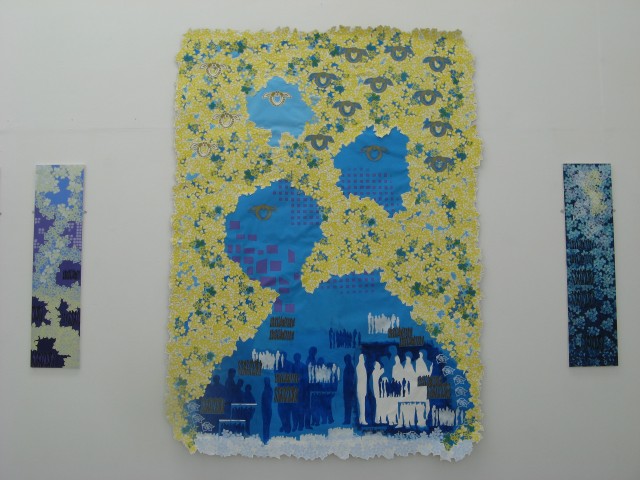 The screenprint that was developed alongside this large canvas piece was completed with a block print of a group of figures that I think of as perhaps standing beneath the blossom, looking up or sitting in a group for a picnic beneath the blossom. 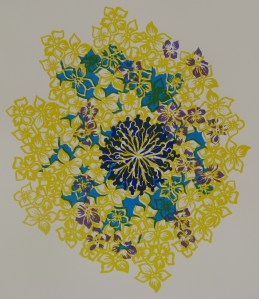 There were a number of other mixed media prints included in the show.